We are all familiar with the activities of the mainstream political parties during the 1920s and 1930s, and it is no surprise that Richmond saw a considerable presence of the three main parties (the Liberals, the Conservatives, and Labour). But what is less well-known is that the period between the two world wars also saw a considerable amount of activity by radical, fringe and extremist groups in the town and its surrounding areas.

In this talk Dr Steven Woodbridg 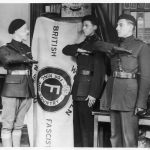 e, of the History department at Kingston University, explored and shared his research expertise on some of the more controversial right-wing organisations that tried to win over Richmond’s citizens during the often turbulent years of the interwar period, ranging from local middle-class protest groups to radical right and fascist movements. Dr Woodbridge shone some interesting new light on some of the darker and less familiar aspects of Richmond’s political and social history in the two decades between the Wars.

The ‘War to end all Wars’ was over. Would Britain become a ‘Land fit for Heroes‘ ? But after the euphoria of November 1918, anticlimax set in. There was the virulent Spanish flu epidemic, rationing, unemployment and economic uncertainty, leading up to the Great Crash and Depression of the early 1930s. Dr Woodbridge, in his excellent talk, described some of the political fringe parties which surfaced following the end of World War I and which had some limited local impact but are now little known or forgotten.

In 1918 the Reform Act was passed, giving the right to vote to many previously excluded(including many working-class people and women over 28). The middle classes, who felt that their sacrifice and contribution in money, taxes and blood to the victorious strugglehad been unprecedented, now felt threatened, impoverished and ‘crunched‘ by the advance of the working class. They flocked in some numbers to support the Middle Class Union, a new party formed in 1918. The founders were Lord George Rankin Askwith, and Pretyman Newman, and the aim (in 1921 the party changed its name to the National Citizens Union) was (to try) to protect the middle classes, to oppose socialism, communism, tyranny, bureaucracy and strike action. ‘No class had been hit harder by the war than the Middle Class’, it claimed.

In the early ‘20s (the time of the Russian Bolshevist Revolution and civil war, of Lenin andTrotsky – and remember too that Britain briefly elected its first Labour Government in 1924) the threat of communism encouraged support for the National Citizens Union, at least for a while. With its message encouraging saving and financial prudence, members and branches increased, especially in the South East, peaking around 1924 (there were branches locally and in Kingston).

The 1920s also saw the emergence to power in Italy of Benito Mussolini and his Fascists.The Fascist Party formed by Rotha Linton Orman came to Richmond, a meeting at Raleigh Hall in 1926 being well attended. The emphasis of the party was to counter communism. Membership locally reached about 200 in 1926. The Fascists took part in local fetes, with brass bands and riverboat trips.

However, the party still vaguely familiar to us today, the British Union of Fascists of Oswald Mosley, wasn’t formed until 1932. In nearby Kingston the BUF was very active, with around 350 members compared with only 100 in Richmond. When the BUF invaded Richmond there was rowdiness and confrontation and ‘disgraceful scenes in Worple Way’.

Dr Woodbridge stressed that these parties never made a major impact but are, nevertheless, interesting to consider as an aspect of local social history now forgotten. But, in any event, by the mid 1930s the clump of steel boots and screams of ‘Heil Hitler‘ could almost be heard from the arenas at Nuremburg as Hitler’s Nazi hordes prepared to plunge the world into a second Great War.