It is with great sadness that we have to share with you the news of the sudden death of our Membership Secretary, Jo Coombes, on Tuesday 10 March. Jo was at our Society’s talk on the Monday evening, as usual doing her front-of -house role of checking attendees against her membership records and dealing with renewals, and most important of all welcoming members and visitors in her friendly and warm manner. Jo was particularly interested in that evening’s talk on the social history of Queen’s Road, Richmond and contributed to the Q & A after the talk, recalling the time she had shared a flat in the road.

After our meeting Jo drove home to Hampton and collapsed from a stroke, dying later in Charing Cross Hospital. This was a dreadful shock for us and her family.

In September 2000 Jo took on the duties of Membership Secretary which she carried out with efficiency. She always made a contribution to our activities with enthusiasm, whether it was volunteering to help at the Society’s stall at the Richmond May Fair, envelope stuffing for the newsletter or making invaluable contributions to our Committee meetings.

Jo trained as a Richmond upon Thames Heritage Guide in 1998, became Treasurer on the death of John Plant and took over as Chairperson when Norman Radley retired. She specialised in wartime and Tudor walks.  Her last research was for the talk on artists and paintings in Richmond, Twickenham and Kew which she gave in the 2019 Know Your Place festival, a talk she was due to give again to the Society following our AGM in June.

We extend our sympathies to Jo’s daughters, family and friends. A memorial service will be held later in the year. 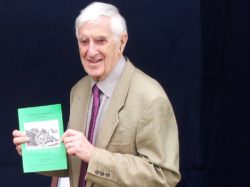 We are very sorry to announce that Len Chave passed away on 17 January  2020 at Lynde House Nursing Home.  Len made a very significant contribution to the Richmond Local History Society and was actively involved with its publications work. He retired after 45 years in book publishing and printing and in 1994 became the production advisor to David Blomfield, the new editor of Richmond History. Len continued to be involved with the Society’s journal and its publications sub-committee and regularly produced detailed sales analyses.

Len was a lovely man who gave so much to our Society. We are very grateful for his contribution to our work.

We are very sorry to announce the passing, on 30 December 2019, of Valmai Roberts. Val was a member of the Society’s committee for many years, retiring as a committee member, and as the Society’s vice-chair, in May 2016. She and her late husband Tony were active members of the Society’s publications sub-committee. Val contributed articles to our journal, Richmond History, and did a considerable amount of research at Richmond Local Studies  towards the preparation of the new edition of The Streets of Richmond and Kew, published lIn January 2019. We will miss her.

We are also very sorry to hear that Society member Valerie Boyes died on 10 January 2020. Valerie taught and lectured in history in schools at home and abroad, wrote history textbooks and in the 1990s was Richmond upon Thames’ advisor for history in schools.

Valerie was on the steering group which set up the Museum of Richmond and became the Museum’s chairman. She made an enormous impact on the Museum’s work and right to the end continued to be very active in researching local history and discovering new information about the Richmond area. Almost exactly two years ago she gave a talk to the Society about the monuments and memorials at St Mary Magdalene’s Church. 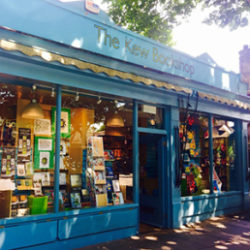 Melvyn Bragg with Caroline Blomfield, who co-founded Kew Bookshop, and its current owners Adam and Wendy Hewson from Hewson Books

Kew Bookshop, founded in 1989 by David and Caroline Blomfield and Tony Barnett, celebrated its 30th birthday on 11 and 12 October 2019 with a series of appearances by guest authors, including Melvyn Bragg and our very own Simon Fowler, the Society’s vice-chair. 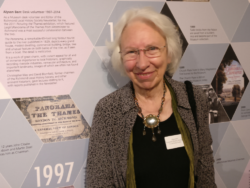 Alyson Barr, one of the 30 people who selected objects for the Museum’s 30th anniversary exhibition

The Museum of Richmond’s 30th anniversary exhibition ran from October 2018 to February 2019. Taking the theme 30 years, 30 people, 30 objects and memories, it illustrated the Museum’s history through 30 people who have contributed to its development and who have selected objects from the Museum’s collection to help tell its story. Our society was well represented, with contributions from our President, Paul Velluet, and three committee members – Robert Smith, Simon Fowler and Alyson Barr.

Richmond’s Christmas history on the radio

Our Vice-Chair, Simon Fowler, talked about “Christmas in Richmond” on Nicky Patrick’s Up Close show on BBC Radio Surrey  on Thursday 13 December 2018. 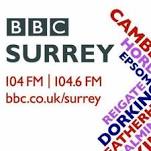 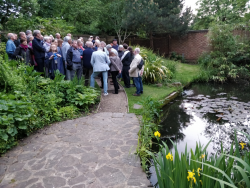 Our President, Paul Velluet, led a fascinating heritage walk on 23 May 2018 for The Richmond Society, looking at exemplary 1970s social housing in Queens Road estate and the 1930s/1960s housing in this splendid garden at Courtlands. 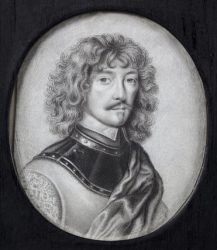 It is often said that William Murray, who was educated alongside Charles I and was granted the lease of Ham House in 1626, was a “whipping boy”, who received corporal punishment for the transgressions of his royal childhood friend. In an article for the Society’s journal Richmond History 36 (2015), Tony Adler, one of our members, says that there is no evidence to back this claim. Tony has been successful in having references to Murray’s supposed whipping boy role removed from the National Trust’s website and from the education website BBC Bitesize. The Times ran a news story about it on 16 January 2018. Find out more

It’s good to see that an issue first covered in an article in our journal has made such a big impact!

If you went to Alan Sherriff’s excellent talk to the Society in April 2015, you’ll know about Harold Pendleton’s role in creating the very first National Jazz Festival, here in Richmond, and how it became today’s Reading Festival. Alan spoke warmly about Harold and was just as surprised as the rest of us that Harold was in the audience, listening to his talk. Harold passed away, aged 93, in September 2017, and The Guardian has published an obituary:
https://www.theguardian.com/…/…/31/harold-pendleton-obituary

Alan Sherriff points out that the obituary does not touch on the Richmond Jazz and Blues Festival other than obliquely as the “Marquee’s garden party”, He spoke briefly to Harold and his wife, Barbara, after his 2015 talk.

Alan asked him why the Richmond Jazz and Blues Festival had not been allowed to continue anywhere in the borough of Richmond after 1965.  “Harold”, he said, “had been summoned to Whitehall and  been told rather bluntly that there was no point in him pursuing his objections.” Harold had been convinced that strong lobbying from other users of the Richmond Athletic Ground about overnight encroachments by a few camping Festival-goers was the sole reason for him being kicked out of Richmond. “Perhaps”, Alan added, “we should have asked Simon Inglis after his excellent talk if he knew more about this particular sporting issue!”

Harold also told Alan the story about the incident with Keith Richards at the Marquee Club which features in the obituary. “I also commented” said Alan “on the great logo for the Richmond Jazz and Blues Festival – the trumpet on a bentwood chair – and Barbara, who worked closely with Harold on the organisation of the Jazz and Blues Festivals, indicated that this was used by kind permission of the Monterrey Jazz Festival which Harold attended on a regular basis with Chris Barber. They were close friends of the founders of the earlier US festival. Barbara added that the logo featured prominently on Harold’s 90th birthday cake,” 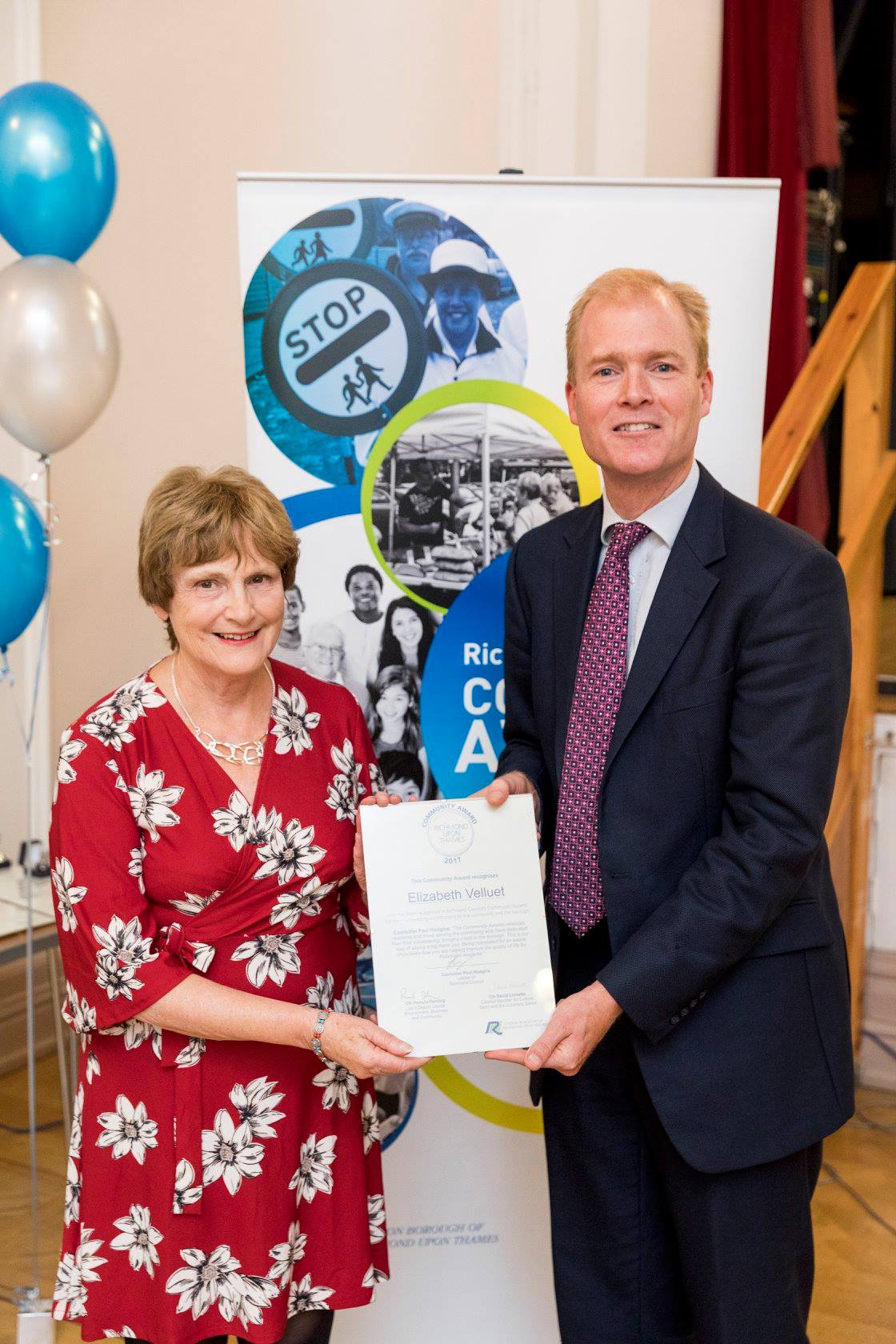 Councillor Paul Hodgins, Leader of Richmond upon Thames
Council, presented an award to Liz Velluet at a civic ceremony
on 15 September 2017.

Liz, who has been Secretary of the Richmond Local History Society for an astounding 38 years (and still going!), was recognised as having gone the extra mile to serve her community.

Congratulations, Liz, and thank you! 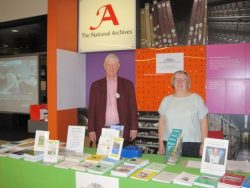 Robert Smith and Shirley Newton on our stand at The National Archives’ Open Day. Photo by Judith Church 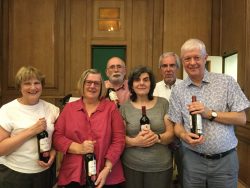 The Society took part in The National Archives’ open day on 16 September 2017, marking its 40 years in Kew. We had a bookstall and our President, Paul Velluet, and our Vice-Chair, Simon Fowler, gave talks.

With a one-point lead over its nearest rivals, the Society beat eight other teams at the In The Know local history quiz on 1 September 2017 at Richmond’s Old Town Hall, brilliantly organised as always by Jane Baxter and the Richmond Local Studies team. Now in its fifth year, the quiz kicked off a month-long celebration of Richmond’s heritage in the annual Know Your Place Festival, which also included guided walks, talks, tours, workshops and exhibitions. 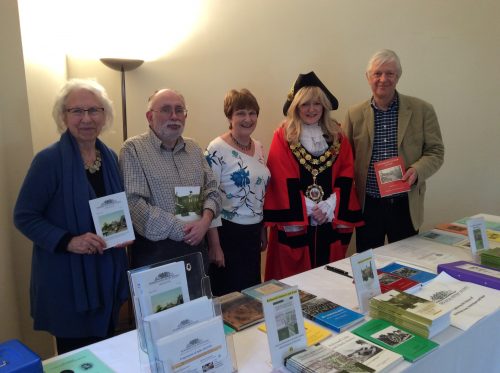 And on 5 November, 2017 Richmond’s Mayor, Councillor Lisa Blakemore, joined us at our Shared heritage event at Pembroke Lodge in Richmond Park, generously provided by Daniel Hearsum.

Calling time at the Star and Garter 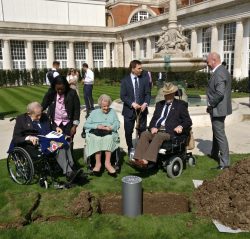 Robert Smith, our Chairman, represented the Society at a ceremony on 6 April 2017 to mark the restoration of Richmond’s Grade II listed Star and Garter Home, which is now being converted into private apartments. A time capsule was buried in the ground to commemorate the building’s http://premier-pharmacy.com/product-category/hair-loss/ history; this included a copy of the Society’s newsletter and a flyer listing our publications and our talks programme.

Simon Fowler, our Vice-Chair, who was its first archivist, gave a well received presentation about its history in February 2017 at the former Home.