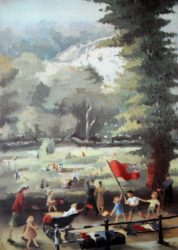 The end of the war found Richmond battered but defiantly unbowed, writes Simon Fowler. Most residents would have agreed with the Richmond Herald that: “life was not easy, yet the people were wonderfully cheery and the life of the town went on”.

On VE-Day on Tuesday 8 May 1945, which celebrated final victory over the Nazis, there were tremendous festivities in Richmond. Planning had begun a few days before, although nobody knew when Germany would finally surrender. It was clear from the news that this could be at any moment. Marie Lawrence, who was a typist in Richmond’s Parks Department, noted in her diary that on the previous day: “everyone was walking around with an air that something is going to happen”. She was helping to organise a concert that was going to take place at the Town Hall on Hill Rise and was worried that the piano would not arrive in time.

On the 9pm news the BBC announced that the Germans had surrendered in the West and that the following two days would be public holidays.

On the morning of the 8th neither the piano nor a microphone had arrived, but after Miss Lawrence paid out the wages to the park keepers she went home. Presumably everything sorted themselves out.

Councillors and the religiously inclined marked the victory in church. The Revd Harold Gray, Vicar of St Mary Magdalene, wrote: “The nation’s thankfulness found spontaneous expression in the great thanksgiving services held everywhere. Our own Parish Church was packed for the evening service, which the Borough Council had asked might be made the civic expression of our gratitude and which the Mayor and Corporation attended in their robes.”

But everybody else seemed to have let their hair down. The Richmond and Twickenham Times reported:

“During the morning and afternoon of the great day Richmond enjoyed comparative quiet. There was a continual throng moving through the town, however, and the riverside was crowded with leisured strollers and hundreds of jubilant children…. When dusk began to fall, Richmond let herself go. People poured from the riverside and surrounding districts joining with the carefree throngs parading Hill Street and George Street. Groups with coloured hats and shining faces danced and laughed themselves to exhaustion outside The Ship in King Street, while in other parts of the town men and women sang sentimental songs or with changing mood danced jigs. Many servicemen were with Richmond’s victory crowds and at the railway station a sailor, looking much the worse for wear, but tremendously happy, was wandering blissfully along draped in a Union Jack… Silence did not reign until the early hours of the morning.”

“the town was all decorated with flags and they all have bows on. Every house is decorated tonight and some are lit up. Bonfires in Wilton Avenue, St Mary’s Grove, Townshend Road and we see lights from bonfires all around the district… At 10.30 we cleared away supper and went out and to the bridge to have a look and then up Townshend Road and round the corner and we met Miss Laws and her next door neighbour who accompanied us to see our lights and we talked to 11.45 and the searchlights came up and threw great beams all over the sky and so to bed at midnight. Sending up of fireworks kept on until the early hours of the morning.”

Perhaps there had been more than just talk. The next morning, she wrote that “my head was awful. Anyone would have thought that I had been celebrating.” Many local residents would have also been reaching for the aspirin.

Although the Germans had been defeated it would take another four months for the Japanese to surrender. Many local men were still fighting in the Burmese jungle or stationed in India. At home, although the blackout had been abolished, things continued much as they had. Food was still severely rationed and it would be some months before service personnel and those in reserved civilian occupations would begin to be demobilised. But the victory which seemed so impossible five years before had been achieved against what seemed like overwhelming odds.

Simon Fowler is Vice-Chair of the Richmond Local History Society.