The Aitons: Gardeners to their Majesties by Frank Pagnamenta

On 1 December 2009, one of Richmond’s most distinguished residents, Frank Pagnamenta OBE, celebrated his 100th birthday with the publication of a book on our Borough’s most distinguished institution, the Royal Botanic Gardens, Kew. In 2009 Kew Gardens was celebrating their own birthday, as it was in 1759 that William Aiton was appointed the first botanic gardener at Princess Augusta’s gardens in Kew. Frank’s book, The Aitons: Gardeners to their Majesties, is the first biography of William Aiton and his son, who between them oversaw the first eighty years of the gardens’ development.

Under George III, William Aiton, a Scottish gardener trained at the Chelsea Physic Garden, was responsible, with Sir Joseph Banks, for making the royal garden at Kew the leading http://premier-pharmacy.com/product-category/skin-care/ botanic garden in the country. His son, William Townsend Aiton, was employed more widely by George IV, both at Kew and as a landscape gardener in the development of the gardens at Windsor and Buckingham Palace. The Aitons were prominent members of Kew Vestry, living in Descanso House at the junction of the Mortlake and Kew Roads. Their substantial family tomb is a feature of St Anne’s graveyard, and they are honoured by a memorial within the church.

Frank Pagnamenta died in February 2010 and his funeral was held, as was William Aiton’s, in St Anne’s Church, Kew.

This important book, with a foreword by Professor Simon Owens of the Royal Botanic Gardens, is available in local bookshops and from our own online bookshop. 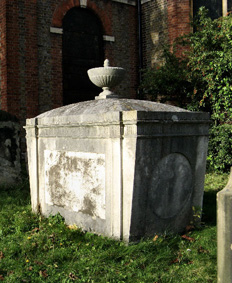 The Aiton family tomb in the graveyard at St Anne’s Church, Kew