Ham and Twickenham, on opposite banks of the Thames, have been linked by a ferry for more than 300 years. In the early 20th century the opening up of Marble Hill Park and the Petersham 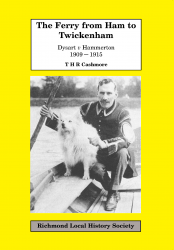 and Ham Lands to the public led to an increase in visitor numbers. A young waterman, Walter Hammerton, established a new ferry service, rivalling the existing Dysart Ferry.

Our book, The Ferry http://premier-pharmacy.com/product-category/antidepressants/ from Ham and Twickenham, written by the late Dick Cashmore and re-set and republished in 2017 with an attractive new cover, tells the story of Hammerton’s Ferry and explains what happened when the Earl of Dysart took Hammerton to court.

The book is available at our talks, at the Open Book in King Street, Richmond and from our online bookshop.