The explorer Richard Burton – schooled in Richmond and buried in Mortlake 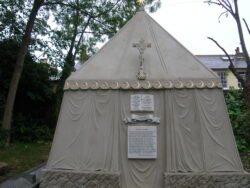 The Burton Mausoleum In Mortlake (Photo by Svarochek/ Wikimedia Commons)

The explorer Richard Francis Burton (1821-1890) spent only a short time in Richmond while he was alive, but was interred in Mortlake when he died.

2021 is the bicentenary of Burton’s birth. The first child of a British Army Lieutenant-Colonel, Joseph Netterville Burton and his wife Martha (nee Baker), he was born on 19 March 1821 in Torquay.

After about six months the family moved to Barham House, Barham Wood, near Elstree in Hertfordshire to the house of his maternal grandparents. Here his sister Maria Katherine was born in 1823 and his brother Edward Joseph in 1824.

His father, who was pensioned off from the Army and suffered from severe asthma, decided to take the family to Europe, settling in Tours, France, which he thought would help his condition.

Richard and his brother and sister were said to have become unruly children so, when Richard was nine, the parents decided to bring them back to England for a stricter education. They went to live in Maids of Honour Row on Richmond Green and attended the school of Rev. Charles Delafosse on the corner of Duke Street and Little Green. Richard called the school the “Horror of horrors”.

There was a serious outbreak of measles in the school after about a year, so the family took the children back to Europe, where they travelled through Blois, Lyons, Pisa, Siena, Florence, Rome, Naples, Pau and finally back to Pisa.

After a short stay at Trinity College, Oxford, at the at the age of 20, where Richard got himself “rusticated”, he then went on to a career in the Army, and became an explorer, anthropologist, poet, translator, Consul for the Foreign Office and extensive writer and publisher of his many travel books.

His wife Isabel Burton (nee Arundell) used to visit her aunt, Lady Gerard, in Mortlake. During one such trip, just after they had married, Richard and Isabel selected their resting place in Mortlake.

On his death, Richard, having been given the last rites of a Catholic, arranged by Isabel,  was interred in 1890 in a mausoleum, built in the shape of a Bedouin tent in St Mary Magdalen Roman Catholic Church. When Isabel died six years later, she was also interred in the mausoleum.

There are numerous biographies written about Richard Burton, including one by his wife. He was a controversial and interesting man. A collection of Richard Burton’s artefacts, photos, paintings and papers is held in the borough – at Orleans Gallery and Richmond Local Studies Library and Archive.