Other volunteers assisting the committee: 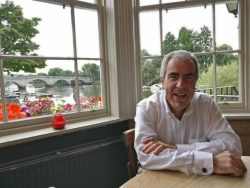 Paul Velluet was appointed President at our annual general meeting on 15 May 2017.

Born in East Sheen, brought up in Richmond and now living in St Margarets, Paul is one of our founder members. He joined what was then the Richmond Society’s Historical and Archaeological Section when it was set up in April 1975 and has delivered talks to us for more than 40 years – most recently on St Mary Magdalene’s Church in Richmond, the Carthusian Charterhouse of Shene, the history and development of Old Deer Park, the impact of the building of the Great Chertsey Road (A316) and Twickenham Bridge, and the history of Richmond Local History Society itself.

Paul is an architect with particular expertise in the conservation aspects of projects involving historic buildings, a former assistant regional director for English Heritage (now Historic England), a local historian and a former Chairman of the Richmond Society who continues to lead its highly successful annual summer season of Heritage Walks.

After acting in the role for six months, Robert Smith was elected Chairman at the Society’s Annual General Meeting in May 2015 and has been editor of its annual journal Richmond History since October 2019. He also edits the Society’s website, manages its social media accounts and leads on its publications programme.

Robert Smith has lived in Kew since 1993. His career has been in marketing and communications, including five years running the press department at The National Archives.

He said: “Founded in 1985 by the late John Cloake, The Richmond Local History Society has made a very significant contribution to our understanding of the history of Richmond, Kew, Petersham and Ham. But its work deserves to be better known and I hope to encourage more people, particularly local residents, to join us in learning about and discovering the history of the area.”

Simon Fowler, who also lives in Kew, is Vice-Chair of the Society.

Simon has been a member of the Society since it was set up. He is a professional writer, researcher and teacher specialising in the two world wars and the 20th century. Simon used to work at The National Archives in Kew where his many roles included editing its family history magazine, Ancestors.

The publications Simon has written for the Society include Richmond at War 1939-1945 (2015), Old Palace Lane: medieval to modem Richmond (2017 and 2020; co-authored with Derek Robinson) and Poverty and Philanthropy in Victorian Richmond (2017).