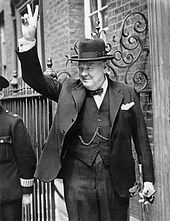 The first was during the height of the Blitz. On 10 October 1940 Churchill made a surprise visit to the Anti-Aircraft Battery near Sheen Gate in Richmond Park. Its guns were part of the plans to protect London from enemy air attack, although how successful they were is not clear, except in reassuring the population that they were being defended.

So far as is known Winston Churchill only made two visits to Richmond during the Second World War.

For most of the Blitz the guns were manned by men from 333 Heavy Anti-Aircraft Battery. During this time the official unit war diary suggests they managed to hit just two enemy aircraft. This was something that civilians were unaware off. Marie Lawrence’s personal diaries are full of references to the noise made by the guns. On 8 September 1940 she wrote that a lone German raider had flown over:

“We rushed downstairs and heard the AA guns pounding away like mad. Terrific noise. We watched from our back windows and saw the shells burst. It was a wonderful sight. They drove him off successfully after about five minutes fire.”

During the Blitz, Churchill loved nothing better than call at anti-aircraft batteries around London, causing his staff to worry about the prime minister’s safety The unit war diary records that he arrived at 8.30pm and spent about 75 minutes with the unit: “Prime Minister, Lt Gen Sir Frederick Pyle [sic], Maj Gen Crossman, with other visitors arrive and inspect all instructions on position. They watch unseen target shooting first with VIE [Visual Identification] and subsequently GL [gun laying].” Sir Frederick Pile was General Officer Commanding Anti-Aircraft Command and Crossman was the Officer Commanding 1 Anti-Aircraft Division.

The General wrote in his memoirs that ‘I had seen to it that a tin hat had been brought for the Prime Minister but he would not wear it.’ During his tour Churchill rejoiced to hear the guns. ‘“This exhilarates me,” declared the Prime Minister bouncing on his heels in the battery operation room. “The sound of these cannon gives me a tremendous feeling.”’ Indeed, Churchill’s wish to be as close to the action as possible, meant that he had to be ordered by George VI not to go to Normandy in the days after D-Day.

333 unit was eventually replaced by 490 HAA Battery, which was the first mixed Anti-Aircraft unit: the women acting as range finders and plotters. According to Sir Frederick Pile: ‘They became one of the wonders of the world. Women marching, eating, drilling, working with men!’ He said that the only real problem had been with the head of the Auxiliary Territorial Service (ATS), which was the women’s branch of the Army, who complained ‘bitterly that our specially contrived living conditions [at the site] were “disgraceful”.’

Churchill’s second visit to Richmond took place on 2 July 1945 in very different circumstances. By now the war was all but over. Back home a general election had been called. As part of the campaigning Churchill made a triumphant procession through south-west London. The event had been well publicised and tens of thousands had turned out to cheer the Prime Minister. At 5.45pm he was due to arrive on Richmond Green, where he was to speak on behalf of the Conservative candidate George Harvie Watt, who had been Churchill’s private parliamentary secretary during the war.

He arrived in Richmond along the Lower Mortlake Road. The Times reporter said of the Prime Minister that “smiling he smoked his cigar and alternatively gave the V sign or waved his hat.”

Marie Lawrence, who was returning from a driving lesson, noted in her diary: “People were thronging everywhere to see Winnie. I came away from Holbrook and met Mrs Humphreys who was waiting for Churchill. Just at that moment came the outriders, then the mounted police, then a long open car and standing in the middle making the V sign to Churchill. The crowd went wild and shouted and cheered.”

The Prime Minister arrived on Richmond Green, which was full of thousands of his cheering and admiring supporters. There’s a short clip of film at Richmond Local Studies Library showing the PM’s arrival surrounded by crowds of people. Churchill is seen standing waving his hat. Standing on the running board at the back of the car are two Special Branch officers looking for all the world like American gangsters.

The Times said that “Churchill’s car stopped under some trees and here he made a long speech… Mr Churchill’s voice amplified by loudspeakers was resonant and was clearly heard. ‘Can you hear me?” he asked at the beginning. The ‘Are we downhearted?’ When the cheers in response died away he said amid laughter ‘I only do this to test the microphone.’” He then spoke in support of Harvie Watt outlining his policies to rebuild post-war Britain.

The newspaper also noted that “The weather which had been threatening with overcast skies cleared while the Prime Minister was speaking and for a few minutes the sun shone… As Mr Churchill drove away [across Twickenham Bridge]… the people ran across the Green to give him a parting cheer. In a short time only a few people were left to listen to an address in an obscure corner of the cricket field on behalf of the Liberal candidate.”

The procession across south-west London made little difference to the election result. Most of the constituencies he passed through voted Labour, although Richmond remained in Conservative hands.