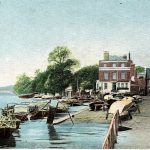 Over the years Richmond has had a large number of public houses. Some are still fondly remembered, others now almost forgotten. A wide range of historic pubs remains to delight us today. The town also once had its own breweries. Richard’s talk covered a selection of the most interesting, and included many illustrations of pubs past and present. 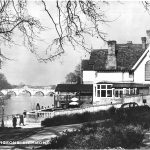 Let’s go for a pub crawl! And where better to go than Richmond? And who better to lead itthan our speaker, Richard Holmes, an enthusiastic and entertaining expert.

Of course Richmond has, and always had, plenty of pubs and taverns. Go back to early Victorian times and recall the days of the Star & Garter tavern under Joseph Ellis’s management, which – with its wonderful hilltop situation and river views – became a magnet for fashionable society, attracting as a regular visitor and diner none other than Charles Dickens. Long gone!

But centuries before then Richmond’s proximity to the Thames (then the transport highway) and especially the existence of the riverside royal palace, and the later royal residence at Kew, meant demand for refreshment and entertainment. The profusion of alehouses in the area was noted in the 17th and 18th centuries. In the 16th century the first pub names appear but there are no detailed records, as the sale of alcoholic drinks was then unregulated. Only in 1870 did tighter licensing laws begin to reduce the number of taverns and alehouses.

Let’s take a quick imaginary trip to a few of today’s pubs. First round of drinks on the famous Green, where by the 18th century there were elegant brick terraces and cricket was played. First call then at the Cricketers (1741), or its immediate neighbour the even older Prince’s Head (originally the Duke of Ormond’s Head of 1706). The legendary Victorian fast bowler Tom Richardson, an early Ashes test hero, was its publican for seven years from 1907. Richardson got into trouble with the magistrates for allowing ‘disorderly women’ to mix with his clientele. The result was that ladies were banned from the pub completely. Not very politically correct today.

Now try the Old Ship round the corner on King Street, really old, going back to 1682 (when called the Six Bells), for many years dealing with busy stage coach passenger traffic. Very atmospheric, but maybe a bit noisy? So, next to a cosy back alleyway pub, none better than the Britannia in Brewer’s Lane, originally 18th century, when called the Magpie. One of the former landlords was tried for highway robbery, whilst a later one wore a fur coat in summer and let geese wander in the bar!

Good beer? What about the famous White Cross, right on the riverbank and prone toflooding at high tide? It is believed to have taken its name in the 1740s from the insignia ofthe Observant Friars whose convent stood nearby until 1534. Lovely views of the water, and look out for an unusual fireplace under a window. So back to Duke Street to visit the popular modern gastropub, the Duke. In the 1740s there was a coffee house here, and in Victorian times a pub attracted the notice of local magistrates because of the cobwebs on the ceiling. Were cobwebs a health risk? Whatever, for years after this pub was called the Cobwebs. And there was a vine growing through the roof, fruit bearing!

No time left to explore other Richmond pubs surviving, some historic; but for an account of these, together with many others now disappeared or demolished consult Richard’s book Pubs, Inns and Taverns of Richmond, full of interesting detail and illustrations. From alehouse to gastropub, Richmond is a good place to explore the great English tradition of the public house.