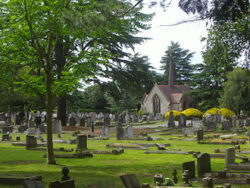 We restarted our talks programme on Monday 14 September. However, because of the continuing Covid-19 restrictions, our first meeting, which included our rescheduled AGM, took place virtually via Zoom, rather than physically at Duke Street Church.

After the AGM, Simon Fowler gave a talk on  “Local lives: Richmond residents remembered”. With photographs and other illustrations, Simon recounted some of the stories of some of the remarkable people – some famous, some forgotten – who have lived in Richmond and the local area.

We were delighted that 50 people logged in to the Society’s first ever event via Zoom. Unsurprisingly, we had a couple of hiccups, which is all to be expected given that delivering events via Zoom is a new challenge for us all. But as one of the participants said when they emailed us afterwards: “The technical hitches all add to the atmosphere.” Our thanks to Simon for an interesting and entertaining talk and for remaining unflustered.

Simon Fowler is a professional writer, researcher and tutor specialising in the two world wars and the 20th century. He lives in Kew, where he used to work at The National Archives. Simon has been a member of the Richmond Local History Society since it was set up and is now its Vice-Chair. He is the author of the Society’s book Richmond at War 1939-1945 and helped edit
the 2019 edition of The Streets of Richmond and Kew.

When the Society last met in March at Duke Street Church, the coronavirus was already stealthily spreading among us, but few realised quite the stunning effect this would swiftly have on our daily lives.

Simon Fowler found a very original and, in the circumstances, rather appropriate way of spending some of his lockdown time; in exploring the four local municipal cemeteries of Richmond and East Sheen (now run by Richmond upon Thames Council) and North Sheen and Mortlake (run by Hammersmith and Fulham Council). He was curious as to what he would discover about the people buried there and what the gravestones and memorials would tell him about how society had changed over the years.

The Burial Act 1852, intended to close overcrowded and unhygienic Victorian churchyards, resulted locally in the creation of fresh burial grounds. In wandering among the gravestones, many of which are in poor condition (the local authority now only mows the surrounding grass), Simon made some interesting discoveries.

A most original and ornate memorial at East Sheen Cemetery, covered by angels sculpted by Sidney Marsh, and listed Grade II* by Historic England, is in memory of George Lancaster, a coal industry magnate from the north (who died in 1920) and his wife Elisa Mary (who died in 1922). In contrast is the severe memorial slab to Sir Max Waechter (1837–1924) a German-born civil engineer and philanthropist who saved our view from Richmond Hill in perpetuity. Despite this munificence his tomb is in poor condition and, in his later years, he was socially shunned due to anti-German feeling during the First World War.

Another benefactor was Joseph Mears, who built houses and pubs, opened cinemas, ran a fleet of pleasure boats and founded Chelsea Football Club. He was also Richmond’s mayor in 1931/32 and was given a big funeral.

Simon’s trek through the weeds and brambles uncovered the grave (whose inscription is hard to read) of the Hilditch family, longtime owners of Asgill House. He also discovered a tomb to George Bishop, formerly proprietor of Bishops Hotel, and gravestones of George Harney a former Chartist leader and lifelong socialist who found sojourn in Richmond, and one to our own David Blomfield so recently and sadly departed.

Moving are the war graves of which there are many (several wartime hospitals were in the vicinity) and one also encounters William O’Mahony of the King’s African Rifles (1896–1928) and the indomitable Charles Hankins. Having lost both legs in 1943, Hankins became a well known resident of the Star and Garter home, walking on artificial legs, cycling through the park on his tricycle and raising funds for his disabled colleagues and children, by long sponsored tricycle rides to Worthing (56 miles) before expanding his efforts into tricycle marathons (John O’Groats to Land’s End).

The civilians are not forgotten either, though a cross erected in memory of 74 Mortlake and Barnes air raid victims leans drunkenly at an acute angle as if itself the victim of bomb blast!

There are also many memorials to Poles, exiled here from their country by the war.

And Simon noticed too how some of the recent memorials veer towards informality, with post-Christian messages and even to pagan-type displays of offerings (bottles of Malibu rum) laid out as if for the deceased to take to a better world. .

Save that from yonder ivy-mantled tow’r
The moping owl does to the moon complain
Of such as, wand’ring near her secret bow’r,
Molest her ancient solitary reign
Beneath those rugged elms, that yew-tree’s shade,
Where heaves the turf in many a mould’ring heap,
Each in his narrow cell for ever laid,
The rude forefathers of the hamlet sleep.

No ivy-mantled tower, Richmond is rather more than a hamlet, and the breezy expanse of broadly laid out, if not well maintained, municipal burial ground may lack the mysterious and intimate atmosphere of Thomas Gray’s 18th-century Buckinghamshire graveyard. But an expedition around Richmond’s modern cemeteries, in these strange and unsettling times, may well be calming to the soul and spirit.