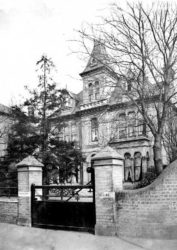 In this talk, a joint event with The Kew Society,  Stephen Bartlett tells the story of Royston House – one of the grand “lost houses” of Kew Road – and of its various occupants. His talk focuses on a fascinating area and epoch in the local history of Kew up to World War I, touching on Lichfield Road and neighbouring roads and on the builders of this part of the former Selwyn estate, who created the streetscapes we are familiar with today.

Stephen Bartlett has lived in Kew for more than 20 years and has become interested in its local history. His current research concerns previous residents of the Selwyn estate. He has written two article on Royston House and its neighbours, published in Richmond History 38 (2017) and  Richmond History 39 (2018).

Amazing where involvement with your local Residents Association can lead you! In Stephen Bartlett’s case, being handed by a neighbour an old black-and-white photograph of a mysterious turreted Victorian neo-gothic mansion, long ago demolished but which had once occupied land where his home now stands, began a journey of historical detective investigation, the fruits of which he shared with us at a joint meeting of the Richmond Local History Society and the Kew Society on 14 January 2019.

This building was known as Royston House and had been built on Kew Road around 1870, surviving until the 1950s, when pulled down and replaced by a modern block of flats. Stephen’s subsequent meticulous investigations have revealed not only the detailed history of Royston House, but also the story of the contemporaneous development of its adjoining streets. He has also been able to trace the the identity of the successive owners of Royston House from the 1870s to the First World War. (In the course of his research tantalising agent’s sale photos of of 1909 showing interior rooms were found: glimpses of Edwardian furnishing, an early domestic telephone included. A lost world indeed, from the days before radio, flatscreen TV, the internet, microwaves and fitted kitchens!)

Hard to realise that until the arrival of the London and South Western Railway in the 1870s  Kew was still largely agricultural. There were meadows, farms, and market gardens and few residential buildings along Kew Road. Once the steam trains came puffing through (though no electric services to central London for another three decades) the landowners in this particular area, the well-known Selwyn family, realised there was money to be made. Whilst the Selwyns themselves were not house builders, they sold plots of their land to assorted local builders on 99-year leases, they themselves initially retaining the freehold reversion and entitlement to ground rent.

Parcelled into individual building plots, in less than 20 years from 1870 the area between Kew Road and Sandycombe Road (including Lichfield, Eversfield and Broomfield roads) was built up. Back then there was still no comprehensive planning legislation to be complied with, merely the Public Health Acts, which required connection to running water supply and sewerage drainage. Very quickly word was spread by local agents that Kew was picturesque and tranquil, and buyers were attracted both from inner London and other parts of the country, as well as locally.

Stephen’s researches reveal the wide variety of residents who came to settle in the area. Not only solicitors, clergymen and bankers, but Royston House itself counted amongst its Victorian and Edwardian occupiers many types of merchants and businessmen: drapers, cotton mill owners, publicans, as well as at least one Mayor of Richmond (and co-founder in 1905 of Chelsea Football Club!), not forgetting an esteemed professor of chemistry, expert in paints and pigments. In the neighbourhood generally records show a remarkable number of widows and spinsters long resident. One Norwegian shipowner in Broomfield Road was found to have lived in Kew for 49 years. Kew seems a place where, if you stayed for a decade, you would remain forever.

Stephen discussed the various builders (Frederick Hampton, James Lucas, Benjamin Blasby) who constructed their dwellings in an interesting range of styles, from Gothic Revival to Queen Anne and Arts & Crafts. A walk along, say, Lichfield Road is recommended: to note the subtle variations in style, the difference in capitals and columns, the change from single to double gables. Much of the Selwyn’s Victorian development survives today, almost 150 years after rising from sleepy elm-flanked fields. But think: what would the first residents say if miraculously reborn they found out how much their property was now worth in 2019? Not to mention their reaction to motorcar traffic and aircraft noise, and flocks of tourists streaming to the Gardens.