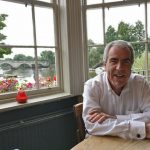 Paul Velluet, President of the Richmond Local History Society, is an architect, local historian and a former Chairman of the Richmond Society who continues to lead its highly successful annual summer season of Heritage Walks. In 2021 he also organised a programme of walks for our own Society.

Paul has given several talks to our Society, most recently in January 2020 when he spoke about the history and  development of St Mary Magdalene’s, Richmond’s historic parish church, which was celebrating its 800th year. 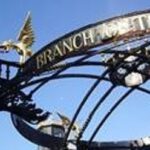 The Arts and Crafts Movement, one of the most significant movements in design and architecture in Britain in the late 19th and early 20th centuries, drew upon the vernacular tradition and celebrated the continuing relevance and value of the work of the individual craftsman.

Although relatively small in number, surviving examples of Arts and Crafts buildings, structures, stained-glass, metalwork and schemes of interior design and furnishing in Richmond deserve attention and assessment.

In his talk, Paul identified and examined this work and its value to the town of Richmond today.

There is a recording of Paul’s talk on our YouTube channel.

At first sight, the Arts and Crafts movement, inspired by William Morris, may have had only a slight effect on Richmond. But that is not our President Paul Velluet’s view and, from his quite brilliant “virtual” tour of the borough with slides of many local buildings, we learned that the effect of the movement locally was considerable.

Morris was one of a number of influential thinkers in mid-Victorian times who were appalled by the philistinism and artistic vulgarity of the early steam industrial age. Before him the famous art critic and writer John Ruskin had railed about the harmful effects that the surge of railway building and the consequent industrial and urban development had upon British society, and both he and Morris had been disgusted by the poor quality of much of the material displayed at the Great Exhibition of 1851; with objects badly manufactured, excessively ornate and artificial, showing ignorance of the quality of materials used. The art historian Nikolaus Pevsner later criticised the vulgarity of much of the design detail.

William Morris began his campaign in 1861, his aim being to improve the quality of design, linked also with a campaign for social reform. (Morris was a fervent socialist, as well as a journalist and writer.). He wanted to restore the integrity of craftsmen taking pleasure and pride in their work, and said that ”without dignified creative human occupation, people become disconnected from life”. He was strongly influenced by medieval styles and used bold forms and strong colours in his designs, not only in architecture, but also in interior design, especially furniture as well as textiles and fabrics. Pick up today at random a Christmas sales brochure and you will see Morris’s pattern designs displayed on shawls, dresses and scarves as well as on teapots. Despite his belief in socialism, he was a pragmatic businessman who opened his central London store for the sale of his increasingly popular household goods and furniture to discerning members of the Victorian middle class. Morris and Co was later followed by Heals and by Liberty.

The affluent Victorian middle class liked Morris’s building styles so much that they flocked to live at nearby Bedford Park Garden Suburb, whose builders Norman Shaw, Maurice Adams and E W Godwin followed Morris’s own inspired examples at Kelmscott Manor and the Red House, Bexleyheath. The characteristics of the Arts and Crafts movement include rusticism, warm brick, much white-painted woodwork, terracotta decoration (numerals, sunflowers) and picturesque-ness. In other instances, white harling balances a bright red-tiled roof, but always there is simplicity of design. Facing Acton Green stands one of Paul’s favourite buildings, by Charles Voysey, a very original Yorkshire-born Arts and Crafts architect. Tall with white-painted roughcast render and a shallow-slated roof, it’s a must see.

But what about Richmond.? At dizzying speed we were sent on a photographic tour of those local buildings showing Arts and Crafts influence. A sample only of those discussed by Paul: a lovely residence in Pagoda Avenue, Kew, then to Ruskin Avenue, also in Kew to see glazed tiles in a door porch; and to Station Parade, Kew where you can still view lead-glazed tiles between the terraces; and then over to East Sheen with more examples of Tudor-style building by the well-known architect Sidney Castle. Holmesdale Avenue in Sheen has a 1920s house in Dutch style and Sheen also boasts the Barker Estate with streets of bucolic-looking farm cottages.

Many buildings in Richmond town show Arts and Crafts influence; Paul discussed at length the Orange Tree pub, the 1893 Town Hall, the White Horse pub on Worple Way (its white-painted harling, by Noel Parr), and the former police station in Red Lion Street by John Dixon Butler, not forgetting Frank Matcham’s incomparable theatre on The Green. We had a tour of the interior of St John’s Church, with its brilliant stained-glass lettering, wall painting, decoration and sculpture by such as Eric Gill, Arthur Grove. Christopher Hall and Henry Wilson, all Arts and Crafts influenced. We were shown sculpture at the RSPCA drinking fountain on Richmond Hill, and the memorial to Alfred Sutcliffe. And we ended up at Victoria Place, humble but cosy-looking town cottages, bedecked with iron stairwork.

As Paul stressed, the Arts and Crafts movement was one of the most influential movements in the history of British design and architecture. It spread across Britain to America and continental Europe, and its effect and influence are still with us. Just a pity, Paul feels, that none of its major practitioners built a significant building in Richmond, though he lives in hope that a Voysey-built house might still be discovered here!

If you missed Paul’s scintillating talk, and to visit all the buildings in Richmond which he pointed out to us, do go on YouTube and click on the recording of his talk!