You can now view Dr Matthew Bingham’s talk on the origins of Richmond’s Baptists, which he delivered via Zoom. More than 120 people logged in to our joint event with Duke Street Church marking the church’s 150th anniversary. Scroll down to read a report by RLHS member Wendy Carter on Dr Bingham’s talk.

In 2020, Duke Street Church, where we normally hold our meetings, is celebrating its 150th anniversary. Duke Street Church, founded by Frederick Brotherton Meyer, dates back to 1870 and its first building, erected in 1881, was octagonal-shaped and built in stone. The current building was constructed on the same site in 1962 with a large auditorium to seat over 600. The Victorian dance hall, Princes Hall, was bought by the church and eventually demolished, being replaced in 2010 with a cafe area, meeting rooms and offices. 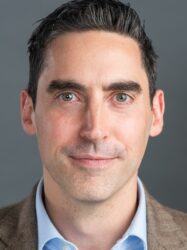 At the invitation of Duke Street Church we will be joining its congregation to commemorate the church’s history. Dr Matthew Bingham, author of Orthodox Radicals: Baptist Identity in the English Revolution (2019, Oxford University Press) will be the guest speaker.

Matthew Bingham teaches systematic theology and church history at Oak Hill College, lonodn, which prepares and train men and women for ministry in Anglican and Independent churches. His research focuses on religion in early modern England. Originally from the United States, he studied history at UCLA and received his Master of Divinity from Princeton Theological Seminary. He holds a PhD in history from Queen’s University, Belfast

The  speaker for our November 2020 talk specialises in the history of the English Baptists, and Dr Matthew Bingham shared his breadth and depth of understanding in a very engaging exposition of the Baptists’ origins and their long hard road to acceptance in England.

John Samuel, Duke Street Church’s senior minister, launched the evening. He described how what is now Duke Street Church gradually established itself:  it was started in 1862 by members of the congregation of Charles Spurgeon, a “celebrity” and highly influential Baptist preacher. This first local congregation met in the elegant building in The Quadrant now housing the lululemon shop. It soon fizzled out, but another attempt was made a few years later, firstly in a lecture hall in Hill Street. With Spurgeon’s help, land was purchased in Park Lane, just off Parkshot, and a Baptist “tin tabernacle” was established on the site in 1870.

The move to Duke Street arose from a desire to be nearer the town centre, and in 1880 a stone-laying ceremony in Duke Street launched the new “particular* or Calvinistic chapel specified in its trust deeds – the original octagonal building was begun. However, by 1946, it had become too small to accommodate its congregation, so Sunday evenings were transferred to Richmond Theatre, filling its capacity of 800. The present building was completed in 1961, and visitors can see an architecture that echoes that of Richmond Theatre.

The history of the Baptists in England goes back to a group of Protestants who believed that the New Testament tells us that only a person capable of making a credible profession of  faith – a “believer” – should be baptised, and they thereby opposed infant baptism. This departure from mainstream beliefs was scandalous to the other Christian churches, both Protestant and Catholic, and Baptists were considered heretical troublemakers, a threat to the religious, moral, and social fabric of society, who should not be permitted to operate freely.

In the 1500s and the first half of the 1600s in Europe, the establishment of a Baptist church would be considered unacceptable, even unthinkable. Baptists were described as “malign spirits” by leading churchmen; Baptist churches were not legally permitted to meet, and were considered enemies of both the church and the state. Persistent public proclaimers of Baptist beliefs could be subject to legal punishments.

However, in the mid-1600s things began to change: in 1644 a group of seven English Baptist Puritan congregations agreed and signed the First London Baptist Confession of Faith, that supported but, importantly, explained fully the rationale behind “believer baptism”. This was followed in 1689 by their Second London Baptist Confession of Faith, which expanded further on the first. These documents formally launched the “particular or Calvinistic Baptist church”, whose roots are in the Swiss reformation led by John Calvin.

In fact John Calvin decried Baptists as holding dangerously false opinions on many fronts; he would have called them Anabaptists as their adherents would have been baptised as an infant and so would actually be baptised for a second time in joining the sect. Anabaptists in Europe did hold radical beliefs significantly divergent from the mainstream churches, including the separation of church and state; they were severely persecuted across Europe as dangerous, threatening the dissolution of Christendom and civic order, and they could be punished by drowning.

In England, the Baptists wrote their Confession of Faith in an effort to correct the many misapprehensions about the movement, and to demonstrate that they were not in fact radical, excepting the issue of infant versus believer baptism, as they interpreted the Bible. The aim was to demonstrate that they were not Anabaptists at all, but had only one, though key, differentiation. The publication was widely distributed, including at the houses of Parliament.

Though not accepted by many, their efforts did lead to greater acceptance, and the Baptist church gained converts over the 1640s. During the Cromwellian commonwealth in the 1650s, Baptists were well represented in the ruling classes, and major figures, including John Bunyon, were overt Baptists.

In 1688 the Toleration Act was passed, legalising non-conformist movements, and Baptists were firmly established as an acceptable religious group in the United Kingdom. By the end of the 17th century they had become recognised as a legitimate non-conformist church.

The key factors in their growing acceptance were threefold: firstly, their clearly expressed interpretation of the Bible, demonstrating that the Bible contained no instruction regarding infant baptism; the Bible was available for people to see this for themselves in their own Bible-reading.

Secondly, views of the church were changing over the 1600s, with a gradual rise of congregationalism (popular among many Scottish courtiers of James I from 1603), with churches organised around local groups and congregations.

Thirdly, as England moved towards civil war, “top-down” authority weakened significantly, and centralised print censorship collapsed in the 1640s, so that people could suddenly write and read a far more diverse range of theological views. The collapse of the old order in this time allowed a great deal more questioning of established views, and the opportunity to explore new ways of doing things.

Such changes enabled the Baptists to expand on their position and beliefs, including the First London Baptist Confession of Faith, and to promulgate their ideas successfully, spreading out from London to the north and west, as far as Ireland.

After a fascinating talk containing a great deal of information, Dr Bingham answered questions, and remained online to continue discussion with those who chose to stay on.