At our meeting on Monday 8 April we have two short talks on current research topics.

Andrea Potts is the Museum of Richmond’s Project Officer for its 2019 exhibition, Celebrating 800 years of St. Mary Magdalene: At the heart of Richmond. She will be talking about the project and revealing some of the fascinating stories that the project’s team of volunteers have uncovered about Richmond’s historic parish church.

Following a BA in History at the University of Cambridge, Andrea worked at the Department for Digital, Culture, Media and Sport. Her roles at the DCMS included delivering national events in the UK, France, Turkey and Belgium to mark the Centenary of the First World War and developing government policy for national museums in England. Andrea is currently studying for an MA in Cultural Heritage Studies at University College London. 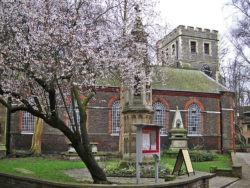 Dr Robert Wood has lived in Richmond for some 40 years.  He undertakes research into our local history, with a special interest in Richmond Park.  He has contributed articles to our journal, Richmond History, and co-presented an earlier talk to the Society about the Hearsum Collection at Pembroke Lodge. 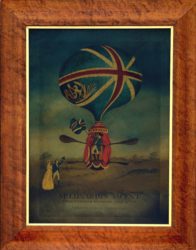 This image, which Robert found in the Hearsum Collection, has prompted his latest research which is revealing some entertaining stories about the amazing Sr Lunardi, his pioneering balloon flights, the Drury Lane actress, and a fashion craze for Lunardi bonnets and skirts!

Bella Hobson reports on both talks

Andrea Potts, as Project Officer based at the Museum of Richmond, gave the first talk. She had been busy co-ordinating research findings of a team of volunteers and preparing for the exhibitions to be held at St Mary Magdalene’s Church and at the Museum from July 2019 to January 2020, an important part of a year of celebrations which include a talk to our Society on 13 January 2020 by Paul Velluet on the church’s history and development.

Grants from the Heritage Lottery Fund and the Richmond Church Charity Estates have helped the project.  Research was carried out using not only the rich resources available at the Richmond Local Studies Library and Archive, but also at places such as Orleans House Gallery, the Metropolitan Archives and the Surrey History Centre at Woking.  Parish magazines and local press notices proved helpful and there were interesting prints and photographs in the collections searched. Examples of these were shown in the presentation: for instance, the print of a mid-19th century christening scene and a photo showing wartime blackout curtains in use during a service. Findings reflected continuity, but also the changing times experienced in the life of the church and community.

Unlike the more recent foundations of St John the Divine and St Matthias churches, which now form part of the Richmond Team Ministry with St Mary Magdalene’s, the exact date of the building in the centre of Richmond is lost in the past. However it is known from documentary evidence that there has been a place of worship there for centuries. In 1211 there is reference to a Chapel of Ease at Shene for the Church of Kingston upon Thames. There was major rebuilding work done in 16th century at the time the palace was being rebuilt and when the place took on the name of Richmond. Henry VII himself donated £10 towards the church building in 1504 and again in 1505.  There have been many adaptations over the years to meet the needs of the time as now, for instance in 1750 and again in 1866. It was in 1903/04 that the new East End, with Vestry and two side chapels, designed by the architect Arthur Blomfield replaced the early chancel which had been crowded with monuments. It is the memorials which are an important feature of the church, though many are not in their original positions. They record some of the important figures of the past. Among those mentioned was Walter Hickman, early vestryman (1552-1617), seen as a kneeling figure on the monument. We were shown too a fine portrait of him in his prime. The Wakefield family are also featured, with their interesting connections to contemporary affairs. Gilbert, born in 1756, died in 1801 shortly after release, having been imprisoned for two years for opposing war with France.  The monument was set up by his brother, Thomas the Vicar, noted as an Abolitionist. Their father George had been clergyman there before. [For further information see Derek Robinson’s excellent book The Richmond Vicars: the ministers at St Mary Magdalene and their role in the community published in 2019: copies are available at the Museum £10 (ISBN 9780951851854921) the Open Book in Richmond and online through the Society’s website].

Among other topics researched were worship, weddings, funerals, music, the bells, the social life of the congregation and the area around the church building. The museum has on permanent display church plate and a carved wooden lintel from above the church door. Permission for the loan or reproduction of images and objects has been obtained specially for the exhibitions. Oral histories are also part of the project.

Many more details, dates and names were mentioned and the themes covered explained… a good taster for the two exhibitions themselves, giving an opportunity to learn more about the history and growth of the church and the people connected with it over the years, and encouraging even more research and the sharing of discoveries. Associated with the exhibition are a booklet and an audio guide app. Research files are deposited at the Richmond Local Studies Library and Archive and there is a link via the museum website. Opening hours can be found there too. The church itself is usually open daily until 3pm. There is a special website giving particulars of celebratory events at www.StMarys800.org

The first talk ranged across the centuries, but the second one focused on an event which took place on a particular day in 1785. This second presentation was by Dr Robert Wood on Vincenzo Lunardi’s balloon ascent from Richmond.

The speaker’s curiosity had been kindled during his work with the Hearsum Collection at Pembroke Lodge, Richmond Park. He had found an image which features this event. Fortunately there is an inscription under the picture giving the date as 22 June 1785 and the place “Richmond nr London”. It is a colourful scene showing a man and woman watching with excitement the airborne balloon. The figure framed by red curtains in the balloon, waving the Union flag, is Lunardi …the

balloon itself has the royal emblem decorating it. There are oars to guide it. Apparently one had fallen off on a previous flight.  Lunardi favoured the hydrogen balloon, unlike the earlier French Montgolfier hot air version of 1783. Lunardi, born in Lucca, Italy in 1759, died in Portugal in 1806, had come to London as an employee of the Neapolitan ambassador. He seems to have been quite a showman and we were entertained by stories related to his interest in the new craze for aeronautics.

His first successful balloon ascent had been in September 1784 from the Honourable Artillery Company grounds, Moorfields, coming down near Ware, Hertfordshire. Among the guests had been the young Prince of Wales, later to be George IV. An illustration shows it on display at the Pantheon, Oxford Street. Publicity had ensured there were crowds to watch the amazing spectacle. (The dog and cat taken with him were not so appreciative?!)

Unfortunately the Richmond ascent does not otherwise seem to be documented, but perhaps more references will be discovered in letters and diaries. Did this event take place in the Old Deer Park? There are however several other ascents from London and elsewhere in Britain reported. These included the amusing account of the occasion when Lunardi and another would- be aeronaut stepped down to lighten the load and left Biggin and (large) Mrs Letitia Sage, actress, to enjoy the experience together. In 1786 there was a published account of five aerial voyages in Scotland. Unfortunately a tragedy occurred when an ascent from Newcastle was attempted, and an assistant was swept up and dropped fatally from a height. Soon after this Lunardi left Britain after just a few years of fame, when ‘Lunardi bonnets’ and balloon- decorated skirts had become fashionable and souvenirs featuring the airborne flights had been selling well.

The informative and entertaining talk was brought to a close with a clip from the 1936 film Conquest of the Air with Laurence Olivier as Lunardi.

[On 3 November 2019  there was a chance to see some of the Hearsum Collection with curator Sue Barber after the interesting short talks presented by local societies at Pembroke Lodge. The Lunardi balloon was one of the pictures which caught my eye! Some items from the collection were being made ready for an exhibition at the Garden Museum, Lambeth Palace Road, entitled Play, Protest and Pelicans: A people’s history of London’s Royal Parks, which continues until 9 February 2020.