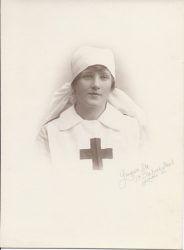 John Drewry is patron of The Nursing Memorial Appeal, which is seeking funds for a permanent memorial at the National Memorial Arboretum to commemorate all the nurses who died in service during both World Wars, as well as scholarships for today’s student nurses researching or training in the fields of conflict or humanitarian need.

John and Eunice Drewry’s presentation included a special focus on the extraordinary story of the Voluntary Aid Detachment (VAD). Their presentation, in which Eunice glot into costume as a VAD nurse, will make particular reference to Richmond borough, including details and pictures of all the buildings requisitioned locally as VAD hospitals during the First World War as well as local residents who became VAD nurses.

John and Eunice Drewry are both professional actors. John is also a stage director and was, for many years, Chair and Artistic Director of Beckenham Theatre Centre, an educational and children’s theatre charity. John is also patron of the Nursing Memorial Appeal.

Sonja Curtis, trustee and Secretary of the Nursing Memorial Appeal, delivered an address at the start of the meeting. There was a collection after the presentation for voluntary donations to the Appeal which raised £337.75, including a cheque from the Society for £50, 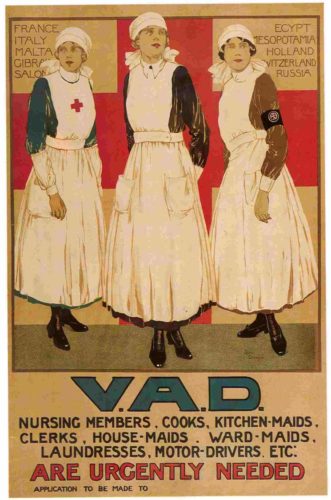 Paul Bunnage reports on the event

John and Eunice Drewry presented the story of the Voluntary Aid Detachment, a talk
given by John supplemented by anecdotes, poems, extracts from diaries, letters and
journals dramatised by Eunice, in character as a VAD nurse, dressed in authentic costume.

The presentation was introduced by Sonja Curtis, Secretary and Trustee of the Nursing
Memorial Appeal/Extreme Nursing Today. Sonja explained how the institution of VADs
in the early days, marshalled by Lady Margaret Ampthill, led eventually to the founding
of a charity to fund training and research in humanitarian and conflict nursing.

In line with this a memorial was erected on 4 June this year at the National Memorial Arboretum, to honour nurses who have served in war and conflict, at a ceremony which was attended by the last surviving VAD nurse from the Second World War – 1,356 nurses are currently commemorated on the memorial; Sonja continues her search for more names for inclusion.

John Drewry, a patron of the charity, described the earliest days of nursing in war zones:
Florence Nightingale made her voluntary, uninvited and unwelcome appearance at Scutari
in the Crimea, the first person to offer medical assistance to those considered beyond help.
At that time, conflict nursing depended on brave and far-sighted volunteers such as, in
particular, Florence Nightingale, and Henri Dunant who founded the International Red
Cross having witnessed the Battle of Solferino. These, and others like Mary Seacole, were
the forerunners of the Voluntary Aid Detachment when volunteers were urgently needed
to support the wounded and dying in the conflicts of an unsettled Europe in the early 20th
century. Nearly all the volunteers were women from the wealthier families of Edwardian
England, mostly with no work experience, let alone nursing skills.

A plea for ‘hospital’ space led to a burgeoning of auxiliary hospitals which sprang up by
the thousands – country houses like Highclere, and here in this area the South African
Hospital in Richmond Park, Queen Mary Convalescent Hospital and Dover House in
Roehampton, and the old Star & Garter in Richmond, demolished in 1919. Old Friars on
Richmond Green, lent by Captain and Mrs C. B. M. Hodgson, became the Richmond Red
Cross Hospital: the staff included 25 (soon increased to 40) members of the Surrey VAD
who cooked and did housework as well as providing nursing care. Additional space was
provided by the loan of nos. 1-2 Old Palace Place. Percy House in Isleworth and the Star
& Garter were staffed by a large proportion of the local VADs.

John pointed out that a VAD meant a VAD, and not a nurse, and should not be encouraged
to claim otherwise! There was a definite tension between professional nurses and the
popular amateurs, which only increased as the latter became involved in actual nursing
(no longer to be seen as just ‘Very Active Dusters‘ or ‘Very Adorable Darlings’). In due
course the VADs were given the chance to go abroad, an adventure which soon hit the
reality of the horrors of wartime. It is hard to know what psychological effects this had on
VADs and nurses – post traumatic stress disorder was not recognised, though one VAD was quoted saying, ‘We carry our own Bedlam with us ever afterwards’.

Well-known VADs of the First World War included Agatha Christie, who served in
Torquay, and Vera Brittain, who was sent to France in 1917. Some went on to serve in the
Second World War. In conclusion John identified a number of Richmond women who were
involved, including Dorothy Vetch, Anna Gourlay, Nellie Knight (of Sydney Road),
Marion Halcombe (of Church Road), Janet Casson (of Apsley House) and, not least, Gladys
Lang, mother of David Blomfield, who served at the Star & Garter.