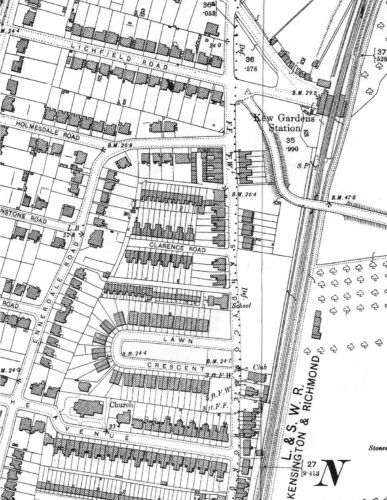 Lawn Crescent is an enclave of Kew that is remarkable even today for its distinctive appearance. Its history also sets it apart from the streets around it. Bordered by Sandycombe Road on the east, it did not form part of the Selwyn estate, unlike Lichfield Road, Ennerdale Road, The Avenue and neighbouring streets that have their origins in the 1870s and 1880s. Originally copyhold land of the Manor of Richmond, Lawn Crescent took its present form a decade or so later than these roads, and its creation was full of twists and turns

Who were its first residents and what was the lawn in the centre of the street intended for?

There were 195 Zoom log-ins at Stephen Bartlett‘s talk, a joint event with the Kew Society, held via Zoom. Stephen a member of our Society, is  a Kew resident. He has an article about Lawn Crescent in our journal, Richmond History (no 41: 2020), which is available from independent local bookshops in Richmond, Kew or Ham, or from our own online bookshop.

If you missed Stephen’s talk, or would like to hear it again, it’s now available on the Kew Society’s YouTube channel. 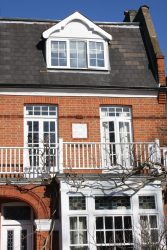 Drive along Sandycombe Road, blink and you’ll miss it. It’s quite possible to have known Kew for many decades, and never to have noticed Lawn Crescent.

But take a turning to the west and you will discover a gem of local domestic architecture and town planning. In Stephen’s own words (in his meticulous account in Richmond History 41 (2020)): ”the uniformity of appearance of its facades and the central green space give it a character that set it apart from the surrounding streets“; the soft red brick walls, double porches, tall roofs with dormer windows, first floor balustraded balconies all form the prettiest of backcloths to the large grass oblong lawn in the middle of the crescent, itself framed by mature trees; all most satisfying to the eye. And the secluded peacefulness offers an escape from the din of local traffic. (Some think that the style of this development may have been influenced by the then recently completed Bedford Park garden suburb.)

Stephen (in his excellent talk, delivered via Zoom) described in minute detail the history of Lawn Crescent’s development from market garden and orchard land; at the end of the 18th century the plot of land was agricultural, worked by tenant farmers. It formed part of the estate of John Dillman Engleheart (while much of the neighbouring land was owned by the Selwyn family.) Surrey land tax records show that the rental value in 1804 was £12 per annum and that the land was occupied by one James Clewley, a local farmer. Soon afterwards Matthew Paine, a local butcher, bought the land and, on his death, the children of his sister Elizabeth Elsley inherited it as copyholders. The field in 1837 was described as measuring “five acres, one rood and four perches”. It remained leased to a market gardener.

In 1868 the railway arrived in Kew, bringing a tide of Victorian suburban development. The elm bordered fields and market gardens in the area were parcelled up for sale and residential building. The neighbouring land of the Selwyns went first, while.the surviving Elsley copyholders saw what was coming, and themselves bought the freehold with the intention of selling it for what they could get.

The buyers in 1887 were a private investment trust called the Southwark Freehold Land and House Property Association (SFL). This property investment concern quickly got to work and its plans were approved by the Richmond Vestry in 1888. Newman and Newman of Bermondsey were employed as architects, in turn engaging James Dilloway as builder. At first the development went swiftly, the houses on the south side of the crescent being built and occupied by 1890 (Dilloway himself taking possession of No.7.) But the northern side of the Crescent progressed more slowly. There were different builders involved, and the first two did little, or defaulted completely. A third builder, James Clarke, was called in to take over. Worse, the state of the housing market fluctuated, and by 1895 there were still 19 houses unsold. SFL grew restive at the delay in receiving their financial return and tried to auction the sale of the remaining 19 properties. But to their consternation, there was no bid.

Enter one George Maillard of Maida Vale, ”a gentleman”. Maillard proposed buying the remaining 19 properties for £9700. Clearly a persuasive wheeler-dealer, he   devised a scheme involving joining with another local association, the Governors of the Bounty of Queen Anne for the Augmentation of the Maintenance of the Poor Clergy” (Queen Anne’s Bounty or QAB), to share the costs of the purchase with him. QAB were already freehold owners of nearby property so knew the area’s possibilities. But Mr Maillard was no gentleman. In fact, George Maillard was not even his name; it was George Cornelius. But his scheming worked. In 1896 SFL transferred the freehold land to QAB, whereupon Maillard was himself granted back 99-year leases. But Maillard was an imposter, had no money, and had to borrow deeply by mortgage to finance his share of the purchase price, got into debt and defaulted. He did a runner but was eventually caught and charged with fraud. A Norfolk solicitor took an assignment of his leases and Maillard disappeared for good. (Stephen’s detective-like research into the activities of this nefarious character, and the twists and turns in the story, are well worth reading in his Richmond History article.)

And life in Lawn Crescent went on, the houses gradually being sold off (though the original tennis courts on the lawn didn’t survive the First World War.) The highly respectable middle-class occupiers have included barristers, solicitors, teachers, journalists and surveyors. Peace campaigner and champion of women’s rights Helena Swanwick lived in Lawn Crescent from 1913 until the early 1930s.

As you might expect, there were a number of senior members of the Royal Botanic Gardens living there, including the orchid specialist Robert Rolfe, his colleague George Massee (British Mycological Society) and arboretum propagator Charles F Coates (identifier of a hybrid camelia and magnolia). Other residents inlcuded the eminent medical microscopist Martin James Cole, while from the world of church music came Thomas Mee Pattison, the organist of St Mary’s Church Ealing, whose compositions were admired (an excerpt from one was played during Stephen’s talk and can be accessed on YouTube).

Lawn Crescent is well worth a saunter round. But it’s unlikely that in the light from the mock Victorian gas lamps now framing the crescent you’ll bump into the ghost of the mysterious and long-gone George Maillard, or George Cornelius or whatever alias he may now have adopted!