This talk was held via Zoom

George Goodwin’s  book Christmas Traditions reflects the joyful nature of Christmas time – whether the history of each of its components is delightfully simple or is intriguingly complex.

In his illustrated talk, George shared his enthusiasm for a very special time of year and explored the gradual creation of our modern celebrations. 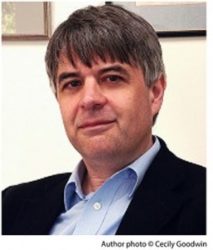 George Goodwin, who lives in Kew, has written Benjamin Franklin in London: The British Life of America’s Founding Father; Fatal Colours – Towton 1461, War of the Roses; and Fatal Rivalry – Henry VIII, James IV and the battle for Renaissance Britain. He is a Fellow of the Royal Historical Society and of the Royal Society of Arts.

So once again, the pandemic restrictions struck, we were unable to meet at Duke Street and were again denied our Christmas party; but George Goodwin richly entertained us on Zoom.

The first surprise was to be told that 25 December was a very special day – for one ”JC”; in fact Julius Caesar, who in around 45BC made his astronomers plot the shortest day of the year; calculated correctly then, it was 25 December. With the harvest gathered, the Romans and later the Saxons decided this was the perfect time of year to hold a winter festival. The Christian church, centuries later, also adopted the date as the birthday of Christ, but only because it was nine months after the annunciation on  the date of the spring equinox (25 March).

Fast forward to the 17th century, and the arrival in England of King James I (who was also James VI of Scotland). King James endured a difficult childhood in Scotland where praying, and not playing, was what one did at Christmas. He was determined to enjoy himself in London. He insisted on a court masque being performed on Christmas Day 1616, with Ben Jonson and Inigo Jones writing and designing it. The resurgent Puritans utterly hated this; drunkenness and lewdness were surely the Devil’s own work! During the Cromwellian interregnum, all such celebration and festivity were barred, not least for fear that boisterous crowds could lead to insurrection and rebellion. And for many years Christmas was an unremarkable, if even solemn, occasion.

But modern “commercial” Christmas? Dutch immigrants to America brought the tradition of St Nicholas (born in Turkey), the reviver of the murdered and pickled boys and the bringer of presents to children, called Sinterklaas. And it was the American writer Washington Irving who first began the his transformation into  Santa Claus in 1809. According to European tradition, only well-behaved children earned presents, the badly behaved got the birch! Later, in the mid-19th century, the political cartoonist Thomas Nast depicted Santa giving out presents to Union troops (the American Civil War had broken out a year previously). We learned that the Confederate side had to find their own Santa!

Irving spent much time in England and sentimentalised his idea of a rural country-house Christmas gathering, a time of goodwill when local squires looked after their poor tenants and children could have fun. But it was Charles Dickens, an admirer of Irving, whom we have chiefly to thank for popularising Christmas as a family festival. Dingley Dell in Pickwick Papers shows how to celebrate it to the full, whilst the unreformed Mr Scrooge, in A Christmas Carol, precisely how not to. The first Christmas tree appeared thanks to George III’s wife and queen Charlotte of Mecklenberg-Strelitz, and the first crackers and cards in 1840s. In 1848, Queen Victoria and Prince Albert invited the Illustrated London News to view (and publicise) the royal family’s trees.

George then traced the development of local Christmas newspaper advertising by well-known local shops, business and stores; such concerns as Gosling and Son (established in George Street by 1823), Wright Bros (1878) and Kempthornes (1899); initially concentrating on ”useful items” for purchase by adults, such as furniture. clothes and jewellery. But. by the time of the First World War, children’s presents were highlighted; chocolates, sweets, then “novel games and toys for boys”. By the mid-1920s Kempthornes and Gamages were both focusing on children’s toys. There were even advertisements for the sale of Christmas puddings (to save having to do it yourself at home!)

George returned to Kew and to St Anne’s Church to see what local traditions survive (happy memories for him; he was married there). A 1927 parish magazine gave notice of a carol service, a tradition continued ever since. (Nationally, carols have been sung since the days of King John; the first service of nine lessons dates from 1880.) Children no longer roam the streets in groups singing carols spontaneously; rather, they attend services formally organised; no longer are there “toy” services to which children were invited to attend and donate toys for distribution to young hospital patients (many children resented having to do this!); but children still love to be photographed surrounding cribs with baby Jesus in the manger. However, the answer to the perennial question: do many nowadays still believe and expect a visit from Santa and his sleigh? Oh yes they do!