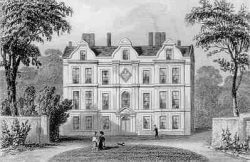 Prince George and Princess Caroline (the future George II and Queen Caroline) came to Richmond in 1718 – the first step in a sequence of events that would lead to, among other things, the creation of Kew Gardens. We’ll be celebrating the Hanoverian royal family and their 100 years at Richmond and Kew with a talk, on Monday 8 October, by Susanne Groom, who lives in Kew and is a former curator at Historic Royal Palaces.

In 1718 the Hanoverian new royal family made a summer home for themselves in Richmond. Through the succeeding three generations they remained in the area until November 1818, when Queen Charlotte died in Kew Palace.

What drew them here in the first instance? What did they find to do? How did they change the area? And what legacy did they leave behind? These are some of the questions Susanne Groom, a curator at the Historic Royal Palaces for almost 25 years, will be answering in her talk to the Society.

Away from the formal drawing rooms and levees of St James’s, Richmond offered an opportunity for each generation to enjoy some kind of family life of their own making. At times it provided a refuge from failings out with other royals, or merely a respite from politics and the public gaze. In Richmond the royal family lived through golden summers of happy domestic joy and also through the most desolate periods of alienation, illness and despair.

As this was a private place, most of what went on in the various houses and  gardens of Richmond and Kew remains hidden, but there are tantalising glimpses, occasionally from first-hand witnesses. There are slithers of information lurking in forgotten diaries and letters, and details of domestic changes and habits can be prised from bills and accounts in The National Archives and at the Royal Archives at Windsor. Together they help to tell a tale of these Germanic incomers who, over centuries, helped to form Richmond’s rich heritage of which we are so justly proud today.

Susanne co-authored At the King’s Table: Royal Dining Through the Ages, which was the subject of her talk to us in December 2013, Discover the Gardens and Kew Palace: The Official Illustrated History.

Looming up beside the chilly Thames, empty and cold, Kew Palace bears witness to a melancholy anniversary. Two hundred years ago, in 1818, the long-suffering Queen Charlotte, consort of King George III “‘Farmer George”), died there, and a century-long local connection with the royal family finally came to an end. (George III himself, estranged and incapacitated, died in 1820.) On 8 October 2018 Susanne Groom gave a scintillating historical review of three generations of the Hanoverian royal family and their lives in Richmond and Kew.

The story of why and how the Hanoverians came to be our royal family is itself intriguing and romantic. The 1702 Act of Settlement provided that only a Protestant (not a Catholic) monarch was acceptable, and when Queen Anne died childless in 1714, the claimant turned out to be George I of Hanover, son of the Electress Sophia of Hanover (who herself had died just before Anne, and was the granddaughter of our Protestant King James I, her mother being his eldest daughter, the ill-fated “Winter Queen”).

George I spoke no English, did not want to come here, and, having locked his first wife up in Germany, favoured two mistresses, one very fat and the other thin, christened the “Elephant”and the “Maypole”. He also soon quarrelled with his son George and banished him and his consort Caroline from court. They came to Old Deer Park in 1718. In contrast to his estranged father, George II (as he became in 1727) and Caroline tried hard to be accepted by their new British subjects. When living in Richmond Lodge in Old Deer Park Caroline began to build a garden in the new style, advised by William Kent, with Grotto, Hermitage and statuary. Then she took a lease on the Dutch House (now Kew Palace) as a home for her teenage daughters, and with the help of Kent and Bridgman embellished her growing garden with statuary and busts, especially of English scientists and worthies (an attempt to anglicise her German roots?).

What Queen Caroline began her son Frederick and her grandson King George III continued. Frederick Prince of Wales was a clever and charming personality (some say the best king we never had!). He took to English customs, especially horse racing, hunting and betting, and even played cricket. He was also very musical. Frederick and his young consort Princess Augusta of Saxe-Gotha bred a large young family at Kew and took passionately to gardening, inspired by contemporary creations at Stowe, Chiswick House and Painshill. It is said that Frederick, who died young in 1751, caught pneumonia after gardening in the rain (or was he hit on the head by a cricket ball?). But Augusta continued to develop the gardens, with appropriately rustic outbuildings: the Chinese Pagoda and Orangery by Chambers and Bute.

The family connection at Kew reached its climax with King George III (whose coronation was in 1760) and his wife Charlotte of Mecklenberg Strelitz, their marriage at first being blissful, later clouded by illness and discord, described by Fanny Burney in her famous diary. George wanted to be an affectionate father to his 15 children, and an atmosphere of informality grew, with the King seen playing with his baby children and the royal family strolling around the gardens. The King interested himself in farming and could be met by the residents of Kew walking the streets, affable and approachable; he once dropped into the Richmond Workhouse. And the gardens continued to develop.

As Susanne explained, by the time the Georgians left Kew, they had shown the royal family in a new light, approachable and humane, as well as playing a full part in the civilised and sophisticated cultural life of the 18th century, lucky in being surrounded by some first-rate writers, poets and painters, as well as landscape gardeners, and helping to forge the English landscape gardening revolution, something valued today as never before.