The Richmond Local History Society, founded in 1985, explores the history of Richmond, Kew, Petersham and Ham and the people who have lived here. We:

Join us for free admission to our talks, an informative newsletter three times a year and discounts on most of our publications.

TONIGHT, Monday 16 May: our AGM and a talk, followed by drinks and nibbles 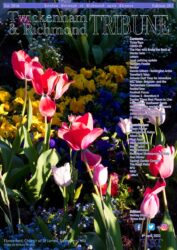 Our Annual General Meeting will be held at Duke Street Church, Richmond (and also also live-streamed via Zoom) on Monday 16 May.

Following the AGM, Simon Fowler will talk about some of the local history stories he has written for the online local newspaper, Richmond and Twickenham Tribune.

Kew resident Simon Fowler has been a member of the  Society since it was set up and is now its Vice-Chair. He is a professional writer, researcher and teacher specialising in the two world wars and the 20th century.

Simon used to work at The National Archives in Kew where his many roles included editing its family history magazine, Ancestors. The books he has written for the Society include Richmond at War 1939-1945.

Following Simon’s talk there will be drinks and nibbles in the Church’s former cafe area, which adjoins the Fellowship Hall.

After taking a break in June, July and August our talks programme resumes on Monday 12 September when we have a joint event with the Kew Society. Conor Jameson’s talk on  Saving Kew and Old Deer Park… and other adventures – The W H Hudson story will be held at The National Archives, Kew (not at Duke Street) and will NOT be streamed via Zoom.

We return to Duke Street Church on Monday 10 October, when Stephen Bartlett will talk to us about John Hamilton, architect of Kew’s Parades.

On Monday 14 November Sandra Pullen will speak on  the history of Sudbrook Park., and our talk on Monday 12 December is by Nick Higham on Private Greed, Public Good, A History of London’s Water.

The Orange Tree Theatre first opened on 31 December 1972 in a room above the Orange Tree pub in Richmond. You can now watch a video recording of Paul Miller and Laura Irwin’s talks on 14 March about the theatre’s 50-year history. Our YouTube channel  also has videos of seven of our other talks. You can also read reports – in our website’s Archive section – on previous talks.

We’re looking for more volunteers: can you help?

All of the Society’s work is undertaken by unpaid volunteers. We’re thin on the ground, and we’d particularly welcome help in these areas:

If you’re interested in exploring or taking on any of these roles, please email our Chairman, Robert Smith, at chair@richmondhistory.org.uk

You can now join the Society online

You can now join the Society or renew your membership online. Our membership year runs from January to December. Membership subscriptions for 2022 are: £12 single; £20 for two people at one address.

If you are already a member and have a standing order in place, this will have renewed automatically in January – there is no need to contact us unless you wish to cancel or to amend your personal details.

If you prefer to join by post, please download our membership form; then print it and fill it in, and send to us with an accompanying cheque or cash. For further information, please email our Membership Secretary, Shirley Clark, or phone her on 020 8948 2671.

If you have not set up a standing order, but would like to do so, please email our Membership Secretary, Shirley Clark.

The 2020 issue of Richmond History, with colour illustrations for the first time, was the winner in the category for best journal in the London and Middlesex Archaeological Society (LAMAS)’s 2020 Publications Awards, announced in 2021.

An article by Martin Stilwell, on Kew and North Richmond’s industrialisation in the First World War, was given an award  in 2021 by the British Association for Local History.

Also in the 2020 issue are articles by Robert Wood on Richmond’s first balloon flight, Stephen Bartlett on the history of Lawn Crescent, Kew and its early residents, and Ron Berryman on Isador Caplan, one of founder members of the Richmond Society.

Buy the 2020 journal (postage-free in the UK), using your credit card or debit card:

When Richmond resident Betty Nuthall won the women’s singles title at the US National Championships in 1930, The New Yorker described her as  “England’s most photographed female”. Rose Barling tells Betty’s story in Richmond History 42, our 2021/22 journal, which also features Richmond Park. 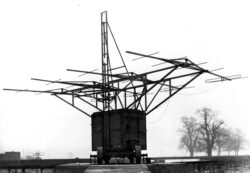 Ground-breaking research by new contributor Timothy M M Baker reveals the site of a World War II radio observatory in the park, which made pioneering discoveries about the Sun as a radio source. 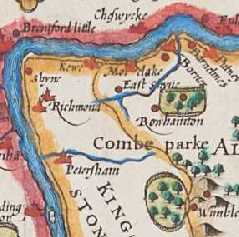 And, using extracts from historic maps drawn up over the past 400 years, Dr Robert Wood looks at what they can tell us about the park’s history. The six maps are illustrated in colour.

This year’s journal has 94 pages, more than 30 of them in colour. Find out more about this issue.

Copies of both journals are available (£5 members, £7 non-members) from our online bookshop. You can also buy the journal and our other publications from The National Archives’ shop, Kew Bookshop, The Open Bookshop in Richmond, Parade’s End Books in Ham, Richmond Local Studies and the Museum of Richmond.

The British Association for Local History (BALH)’s website has speaking notes and slides for two ten-minute talks by our Vice-Chair, Simon Fowler: Being old in Victorian Richmond and An Alternative Local History: the time traveller of Richmond.