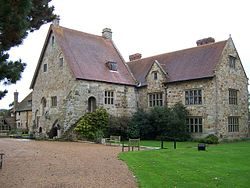 Michelham Priory in East Sussex is a fascinating Tudor mansion surrounded by England’s longest medieval water-filled moat. Set in seven acres of beautiful grounds (including kitchen, physic and herb gardens), its history covers some 800 years from its foundation by Augustinian canons, through the destruction caused by the dissolution of the monasteries, to its later life as a private country house and use as a base for Canadian troops in World War II preparing for the Dieppe raid.

As well as a guided tour of the house, we can explore outside features including the medieval watermill, hisoric forge, replica Bronze Age roundhouse, rope museum and magnificent Great Barn. There is also a cafe (well reviewed on Trip Adviser!) providing hot and cold food and drinks, with indoor and outdoor seating.