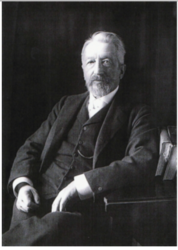 The summer of 2020 sees Richmond reconfirming its vows with its town twinning partners of Fontainebleau and Konstanz. The idea behind town twinning lies with Richmond resident Sir Max Waechter, who in the years before the First World War advocated closer European union. In this talk Simon Fowler will explore Sir Max’s ideas and look how town twinning developed in Richmond after the Second World War.

Simon Fowler is a professional writer, researcher and tutor specialising in the two world wars and the 20th century. He lives in Kew, where he used to work at The National Archives. Simon has been a member of the Richmond Local History Society since it was set up and is now its Vice-Chair. He is the author of the Society’s book Richmond at War 1939-1945 and helped edit
the 2019 edition of The Streets of Richmond and Kew.

Simon’s talk, part of Richmond’s Know Your Place heritage festival,  is presented in association with the Richmond in Europe Association.